Things to do in Istanbul

Istanbul, also referred to as the bridge between Europe and Asia, is a magnificent synthesis of both old and modern life. These worlds converge with the city's vivid, bustling streets, rich history, and seemingly unending supply of hidden treasures. Continue reading this blog where we give a definitive overview of what things you can do in Istanbul, Turkey! Istanbul's top attractions range from game-changing landmarks to the best antique shops in the country, making them as diverse and intriguing as the city itself. Here, food, interest, and fun seamlessly converge. It takes some getting acclimated to Istanbul, but surrender yourself to the magic of this city. You can opt for skip the line tours across the city to save time and see more things in a day or take a guided tour for the ultimate experience. 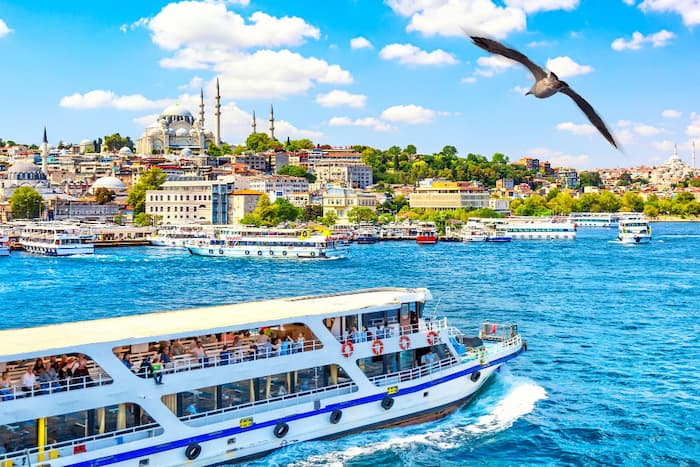 Istanbul, which is currently the biggest metropolis in Europe and previously known as the center of the Ottoman Empire is situated on both sides of the Bosphorus, has long been referred to as the meeting point of East and West. Istanbul is a city that successfully combines its cultures and history, creating an interesting destination with much to offer visitors from around the world. Istanbul, a modern metropolis that was established in the Neolithic era, honors its past through Byzantine monuments and medieval bazaars.

In addition to Istanbul's notable tourist attractions like the Blue Mosque, Hagia Sophia, and Topkapi Palace, there are also bustling bazaars, charming old neighborhoods, and vibrant eating and nightlife scenes to explore on either side of the city.

Istanbul's bustling, colorful Spice Bazaar is a delightful location to explore and a literal treat for the senses. Its spice-filled stalls and shops are located in the Fatih neighborhood, close to the Blue Mosque and Hagia Sophia, making it one among the most well-known and well-liked covered retail complexes in the city. With more than 85 shops currently lining its gorgeous indoor pathways, the bazaar, which was constructed in the 1660s, has exquisite architecture. You can shop here for sweets such as Turkish Delight and gifts in addition to a wide variety of vibrant spices. Everything from dried fruit and nuts to hand-made jewelry and textiles are offered for sale.

The Galata Tower dominates the Istanbul skyline at 67 meters (219 ft) high and provides stunning views of the old city and its surrounds. When it was constructed in Istanbul in 1348, the medieval stone tower known as the Tower of Christ was the city's tallest structure. Even now, it overlooks Istanbul. Over the years, the tower has undergone modifications; at one point, it served as an observation tower for spotting fires. The best views of Istanbul are from the top and you can also see the entire Bosphorus strait and the beautiful Galata Bridge.

The Dolmabahce Palace, which has been compared to the Palace of Versailles, has been described as luxurious, plush, and magnificent, to name just a few characteristics. Turkey's most opulent palace, constructed in the 19th century using 14 tons of gold leaf, combines traditional Ottoman design with Neoclassical, Baroque, and Rococo European architectural styles. Six Ottoman sultans lived there from 1856 to 1924, and Queen Victoria gave it the largest Bohemian crystal chandelier in the world as a gift. The Dolmabahce Palace was constructed along the Bosphorus seashore, which makes for a spectacular site.

With 5,000 shops, the Grand Bazaar is one of the world's largest indoor marketplaces and should not be missed by tourists who enjoy shopping. The bazaar draws more than a quarter million visitors each day and sells products including jewelry, hand-painted ceramics, antiquities, spices, and carpets!

With its enormous dome, which covers what was for more than a thousand years the largest enclosed area in the world and measures 102 feet or 31 meters in circumference, the Hagia Sophia is a masterpiece of Roman engineering.

Hagia Sophia, which is Greek for "Holy Wisdom," alludes to Jesus Christ, the second person of the Holy Trinity. The building, which Justinian, the Byzantine emperor, had built between 532 and 537, was an Eastern Orthodox cathedral until 1453, with the exception of around 60 years in the 1200s when it served as a Roman Catholic cathedral.Most recently, it has been converted into a mosque so Muslims can now visit the Hagia Sophia Mosque and pray inside as well!

Immerse Yourself in Local History

A visit to the Basilica Cistern is essential for anyone who appreciates the essence of good architecture. Numerous subterranean cisterns were constructed during the Byzantine era as water storage facilities, providing the city with fresh water.The Basilica Cistern is the largest cistern located in the city!

Numerous world-class attractions are located in Sultanahmet Square, which is constantly busy. The Hippodrome serves as the square's focal point, and the Blue Mosque, Hagia Sophia, and Topkapi Palace are all visible from there.

Start your search for Istanbul's most well-liked activities by strolling down Istiklal Street!

You can visit art galleries, shop, enjoy a cup of coffee, or get some lahmacun on one of the busiest streets in the city and a hub of culture.

In addition to the several attractions already mentioned, something that should also be on your list is the Golden Horn! The freshwater estuary known as the Golden Horn divides the city's historic from new sections. The world's largest natural harbor, which divides the European shore in two, was converted into a significant urban waterway from a historic trading harbor.

The Beylerbeyi Palace, an elegant historic Ottoman summer residence situated on the Bosphorus' Asian shore, is one of Istanbul's most popular but underappreciated riverfront attractions. Built in the middle of the 19th century for Sultan Abdülaziz, the palace's sumptuous interior design and furnishings, which include European furniture, marble floors, crystal chandeliers, and beautiful linens, provide a close-up look at the affluent living of the time.

Some More Fascinating Places to See

One of Istanbul's must-see sights, Topkapi Palace blends history and breathtaking beauty into a leisurely experience. The lavish Topkapi Palace was the imperial palace of the sultans who governed the Ottoman Empire for almost four centuries. It is one of the biggest remaining palaces in the entire globe. Soon after conquering Constantinople in 1453, Sultan Mehmed II began construction on the palace. He lived there until his death in 1481. The palace was transformed into a museum in 1924 and now houses a sizable collection of artwork, ceramics, jewelry, manuscripts, and other treasures from the Ottoman Empire. The 86-carat Spoonmaker's Diamond and the jewel-encrusted Topkapi blade are significant items. Sacred Islamic artifacts are also kept in the palace, including the Prophet Mohammed’s sword and cloak. Most of the incredible complex is unrestricted for the public to see.

Moda is a beautiful area on Istanbul's Asian side. You can clearly observe the difference between the old and the modern in this location.

Another must-do Istanbul experience is going for a Turkish bath, which involves having a layer of skin washed off. A hammam is a traditional bath that has been around since Roman times and is frequently situated in lovely domed buildings. The procedure begins with a brief dousing in water, which is followed by a brief relaxation break on a heated marble platform. The attendant next vigorously washes the patient using black soap and a unique rough mitten to remove dead skin cells.

Things to do in Istanbul

Apartments for Rent in Kadikoy